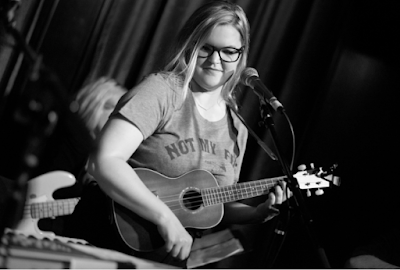 I would expect the likelihood of finding good country music in Los Angeles about as likely as that of Berlin or Moscow. Nonetheless, Cindy Jollotta is actually a singer-songwriter based in LA, previously playing across the country with her band, The Podunk Poets. Her daring new EP release, “Ghosts,” now has Jollotta striking out on her own with songs that attempt to inject alt-rock with some down-home bluegrass ala Lucinda Williams. (A comparison that any younger female country singer without big hair must get exasperated with.)

The EP starts with “Hony-Tonk Heroine,” a slow beat ukele-violin combo that finds Jollotta morose with regret over what might’ve been had her career been influenced better. “Sometimes broken people can be just a little too much to take,” she sings. “Coulda been a honky-tonk heroine but something got fucked up along the way…” Poor decisions have caused her dreams to strand her. “So I’ll be here, just singing to the wall…”

The next song and first single, “Leave Slow,” is--funny enough--much faster and sounds like what I consider true honky-tonk to be: fast and sassy. It’s a breakup song. “Please leave slow. I want to watch you go,” the chorus chimes. “I want this pain if it’s the last I feel of you…” The tune contains a nice piano change up before bringing in a heavy guitar riff, a very unexpected development which demonstrates that Jollotta isn’t afraid to take risks. It’s also a great way to stay relevant. 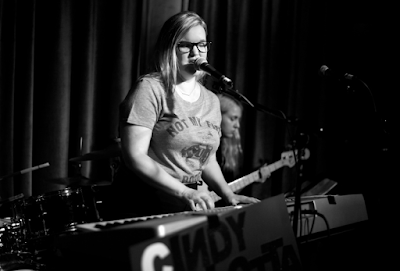 “Now You Can Wait” is perhaps the EP’s most powerful song with the rawest feelings. It’s also another break up number. “I let you build your walls and tell your scary stories…,” Jollotta sings. The lyrics hint at not just an emotionally abusive relationship, but a physical one. “Thanks for your hands around my throat. I promise to be good if you let me go.” Yikes.

The EP concludes with the delicate and quiet ukele tune “Merry Christmas, Darling,” which makes for a positive message to send us off with. It’s the holidays, an occasion for closure and restoration. It’s also a time for hope. “Maybe it’s just the season,”she sings.“I’ll take what it’s giving because, look around, we made to ring a new year in…”

Jollotta categorizes her music on “Ghosts” as Americana Gothic. “Dark Country meets Folk Pop. Dixie Chicks meets My Chemical Romance.” Perhaps, sorta. But I would venture enough to say that Jolletta defies such labels, for the most part. Her music and message feel more original and compelling than that. More personal.

As she sings on the last track: “Because after all that we’ve been through, it’s still me and you…”

Included below is the music video for the single “Ghosts.” For some reason it’s not included on the track list for the EP itself with which it shares a name. Jolletta describes this song as “feelings of heartbreak and remorse that only one can experience and know by going through the trials and tribulations or life itself.”