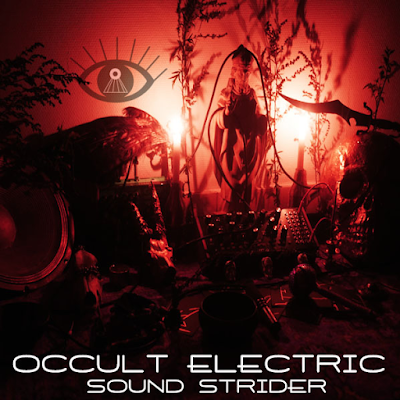 
French electronica artist Sam Waks, better known as Sound Strider, has just released “Occult Electric,” which is a title that made me love the music before I’d even heard a note of it. I also was maybe half-expecting a NIN or Marilyn Manson rip-off. King Diamond anyone?  (That’s the album cover above. Holy shit, it looks evil.)

I was being presumptuous though. This music is a lot more interesting than that, thank God. (Or thank…Satan, I guess.) There’s no lead singer, only a string of disconnected voices and what sounds like radio messages. The first track, “Helpless Cogs,” which I assume refers to people with jobs, also makes for a perfectly trippy intro. I will always be a sucker for synthesizer music played over a dance beat with people speaking in the background. Makes the music multi-dimensional, like we’re hearing a soundtrack to a scene loosely experienced.

The next track, “Hail Eris,” has so much talking in it that it’s practically a spoken word-piece. I tried following what the voice is saying, but soon decided not to, just allowing the words to become part of the tapestry. Enjoy the music.

“Plague of Wizards” (Is this what you call more than one wizard gathered together?) is my favorite track. Starts off with a deep groove and Eighties-warm keyboards bathing the listener in sonic water. A voice speaks and I recognize it from earlier. Sound Strider’s voice: “We are beset by a plague of wizards. They serve a historic purpose. For whenever a society undergoes radical change, alternative spiritualities proliferate….” Then: “It is up to the wizards to determine how their new spirituality will manifest. Most will end up crying in the wilderness or being put to the stake in various ways…” Sounds pretty serious.

The last track, “Embrace Chaos,” has our narrator still talking, but gives way quickly to a wall of drums--some high, some low--and jam-basslines overlapped by what sounds like a female robot telling us about the universe and accepting the absurdity of it all and how we should:  “Question, always question beliefs, rules, roles, everything…”

The most impressive thing about “Occult Electric” is the production. It’s flawless, far as I can tell. This isn’t surprising because Sound Strider (“Sam Waks”) has already released 5 EP's, performing them in France, Germany, Australia, Morocco, the United States, and Portugal.

He’s also worked with Danza del Caribe, a modern Chilean dance company. With this new release, Waks has now started a label and production company called Red Tent Records with friend Ghost In The Chill. You can hear both artists, plus Waks' last project Metabard at www.redtentrecords.com

"This release explores my relationship with chaos magic and the occult,” Waks says about “Occult Ecletric.” “In some sense it is about the search for a new way of being unbounded by the strict codes of monotheistic religion and/or scientific materialism."