I’ve always found it interesting that so many creative people get degrees in Psychology, then end up working creative fields anyway. I still figure that Psychology degree was worth it though. It’s always good to understand your own mind before letting it do what it wants, right? 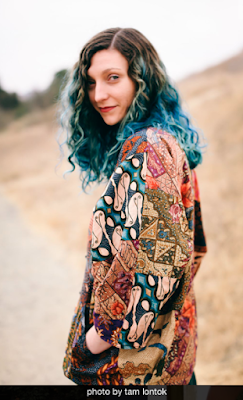 In 2014, after getting her BA in Psychology, Jessica Gerhardt put out an EP of songs she’d written and called it "Words Like Rainfall," recording under the name “Feronia.” This was a collaboration with producer Patrick Doyle and some musician buddies of Gerahrdt’s. It was also the same name she used to record a cover of Emmylou Harris's "Little Bird" on an Emmylou tribute album for animal rescue charities. Gerhardt has now decided to record and perform under her own name. Put herself out there.

The song for the video, “Be My Hands,” is a movie soundtrack-friendly track with a muted skip-beat placed under a bass, piano, snare combo. Gerhardt’s voice sounds like Adele quite heavily to start, though it’s what the song calls for. Gerhardt’s voice soon finds its own pitch and we’re treated to a song about the excitement and danger of a new relationship.

“We feel the calm, the energy between our arms and our words, and the things that can’t be seen,” she sings. “So be my heart guiding me and everything I do…”


As for the song’s music video, Adele could only hope to have one this cool. Gerhardt sings to us from a dark room, illuminated by video projections. Interspersed are cuts of kaleidoscopic lights with colored smoke puffs. It’s fun and hypnotic. With her blue locks, talisman-sized earrings, and psychologist sexiness, Gerhardt plays to the camera very well. By the conclusion of the video, she’s emerged from the darkness and sings in sunshine surrounded by nature. The kaleidoscopes and other abstracts get prettier. There’s happiness and hope.


“Be my hands as I hold this person close to my heart,” she sings. Gerhardt does.

Want to listen? Please purchase below: