BOOK REVIEW: SCI-FI, AMETHYST, Book One of the Jewel Series by Emilie Vainqueur 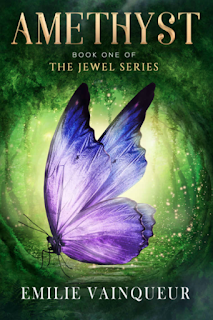 AMETHYST is a dystopian fantasy romance serving as Book One in The Jewel Series. The book begins with “Hour Eight,” the mysterious name for a female character running from pursuers, chasing her for the jewels she’s stolen. Vainqueur makes the excellent choice to have her main character faced with the decision to either confront these pursuers or jump from the top of a building. She actually decides to jump. This lets us know up front that we’re not dealing with just any normal thief. Any person willing to do something so horrifying and with any expectation whatsoever of survival is functioning at a level of bravery that’s unimaginable to most of us. It makes us want to know much more about who this person is and why they do what they do.

My favorite description from early in the novel: “It laid flat on my forehead like it was supposed to, covered my mouth and nose, leaving just my eyes and the shape of my figure to the darkness.” It cuts a striking image.

The mention of “Regulars” soon implies that we’re in some sort of dystopian future in which people are compartmentalized according to some forcefully necessary status bracket. This is established effectively in a break from the action and continues throughout the book.

In the Amazon description of the book, Vainqueur gives her main character a voice:

“My name is Amethyst Oh-Maya and I have a secret. I was born with the curse of Mother Nature and I have no idea why.