BOOK REVIEW, FICTION: A Good Demon is Hard to Find by Kate Moseman 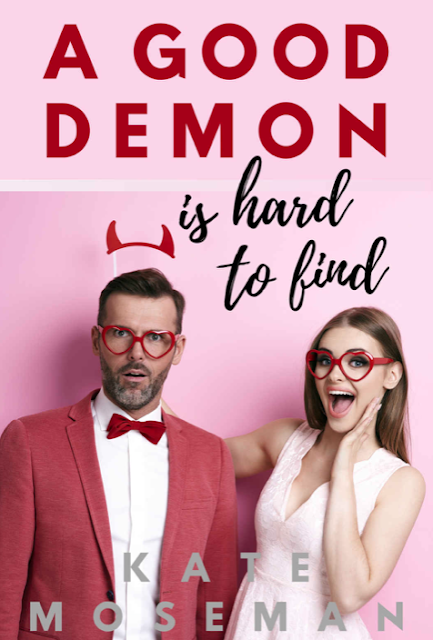 A Good Demon Is Hard to Find by Kate Moseman is a quick, light-hearted read of the funniest sort. Or at least as light-hearted and funny as a novel can be while involving a devastated divorced woman who’s visited by a demonic spirit. The demon offers to help her in any revenge plot she asks for. Naturally, she falls in love with him since the way to any woman’s heart is through satanic-level vengeance, especially where cheating husbands are concerned.

The novel is split into 3 parts. First, we get Erin, a sad, frail woman tormented by her husband’s betrayal. Mark has not only cheated on her but did so with Erin’s best friend. It’s every wife’s nightmare, and always made infinitely more miserable by a micro-managing mother. Erin’s salvation arrives in a throwaway church rhyme:“The Lord forsake you and the Devil take you.” She spits this at her ex-husband and apparently this happens to be the only words needed to summon a demon and have them under your command.

Erin’s demon is named Andromalius, but you can call him “Andy.” He refers to himself as a “Great Earl of Hell,“ and appears to her as a metrosexual, handsome man in a red suit and bat wings. (Because having him appear as a loathsome monster would be a completely different novel.) Andy is demure and polite and eager-to-please. The only true evil to him is his talent for mischief. He also gives a great massage, though seems likely this would be second nature to any demon.

Part 2, we follow Andy’s POV as he fights to escape banishment at the hands of Erin’s friend Raya who, of course, is a secret witch and quite a powerful one. The fourth character in the mix is Phoenix, another demon summoned by accident when Erin and Raya attempted to retrieve Andy. Phoenix is a sassier demon and serves as Andy’s conscious, though often he’s the id as well.

Part 3, Andy and Erin inevitably develop feelings for one another. It’s a love made impossible by her being mortal, but—as we all know—at the root of every deepest love affair lies the forbidden.

It’s a sweet, sitcom-humor story, which manages to make the unholy feel adorable. Andy and Phoenix might be from Hell, but their hearts are from Heaven. There’s even a metaphor made between the women and their dogs, their canine characters matching those of their demons.’ Does this make a statement about our soulmates being pet-like in their ability to comfort us and relieve stress? Not sure if Moseman intended to dive as deep as that, but it does beg the mystery. Hell, her dog is even named “Nancy Drew,” so maybe.